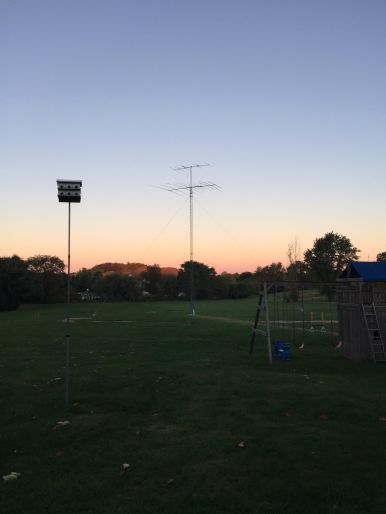 In August 2015, I started the process of putting up a new tower.  I first started by contacting the local zoning board to insure that I would not have any issues.  As it turned out, I didn’t even need a building permit.  I asked them to send me an email stating that there were no requirements to putting up my tower.  Once I received that, I moved forward.

On a Saturday morning in early August, my wife and I made a road trip to DX Engineering.  I had wanted to visit their store for some time and this seemed like a good reason to go. I spent about an hour with Bob Naumann, W5OV who helped me select everything I needed for the project.  I already had 60 feet of Rohn 25, a Hygain TH11 and a Yeasu 1000 rotor.  After about a week of pondering I placed my order.

WHERE TO PUT THE TOWER

I live on just over 3 acres.  My backyard is about 200 feet wide and 500 feet deep.  I didn’t want the tower to be too close to the house.  With all of the electronics, kids computers, etc., I wanted to get the tower away from the noise.  I also have to deal with the leach bed which is in behind the house (and the kids swing set).  After laying it out, the tower wound up being just over 200 feet behind the house.

My friend and neighbor Greg (NI8R), has an auger attachment for the back of one of his tractors.  He was kind enough to bring it over to start the holes for me. This saved me quite a bit of time digging out all of the dirt.

Rohn specs call for the guy anchor holes 4 feet by 6 feet by 4 feet deep. These specs are the same whether you are putting up 30 feet of tower or 200 feet.  I was able to go down 42 inches before I ran into clay that I could not dig out by hand. 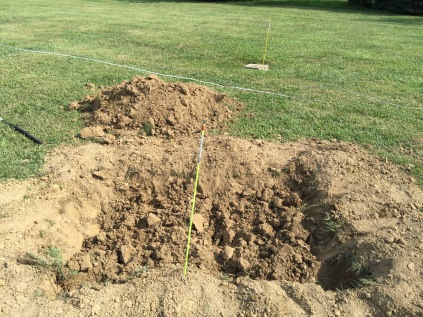 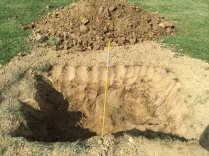 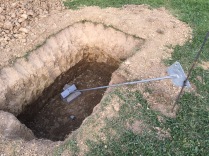 We drilled the holes on a Saturday night.  I spent all day on Sunday and every evening that week digging.  I decided to take that Friday off to finish up.  I had ordered 5 yards of concrete to be delivered early Saturday morning.  By late Friday afternoon, the tower was formed and everything was ready to go.

Early Saturday the concrete was delivered.  I ordered a 4000 pound concrete with fiberglass to help strengthen mix.  We were able to back the truck up to each hole which made the job easier. 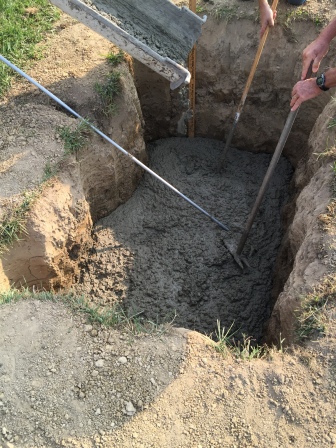 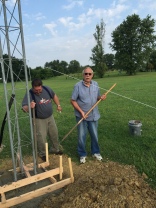 I purchased about 300 feet of phillystran and some 3/16 cable to guy the tower.  This require the use of grips to attach the guy wire to the tower and the anchors.

I spent an afternoon measuring, cutting and prepping each of the 6 guy wires.  It turned out to be more work than I had anticipated.

After giving the concrete some time to cure, I started stacking sections.  The first few sections went up easily and we attached the first set of guy wires. 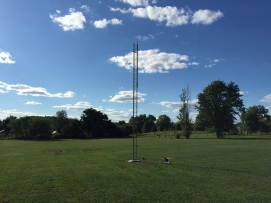 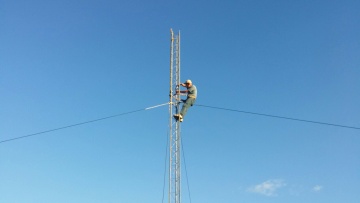 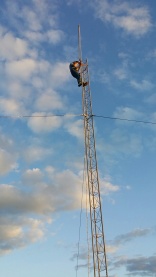 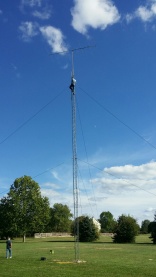 I live in the country where we have “critters”. I wanted to keep the cables safe from them, so I decided to install 4 inch conduit between the tower and the house.  This required a trench to be dug. Remember that the tower is just over 200 feet behind the house.  This took a good bit of effort, but after a long Sunday afternoon and a few more evenings, I was ready to glue the pipe together and place it in the trench.

A friend gave me a metal box to mount on the tower.  This gives me room to place my antenna switch and allows for future growth.

I drilled a 4 inch hole in the bottom of the box. This allows the pipe to fit directly into the box just enough to keep things sealed up.  I also drilled a 3 inch hole to allow for the coaxes and rotor cable to enter from the tower.  I installed a 3 inch piece of conduit in this hole to keep the cables from getting cut on the metal box.

I also installed a second box on the house.  I drilled a hole in the back of the box and stubbed a 4 inch piece of conduit through the band board.  The conduit from the tower also comes up through the bottom of this box and keeps the conduit sealed at both ends. 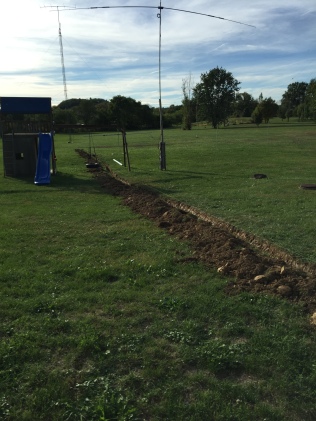 I used duct seal in the holes to keep the “critters” out.

My TH-11 came from a good friend (Steve, KA1VHF) who unfortunately had passed away from cancer about a year and a half prior to this project.  The antenna was in good shape, but I wanted to insure that it would work well for many years into the future.

I spent a good deal of time disassembling each element, cleaning each joint and putting on a fresh coat of Penetrox.  I also took each of the 6 traps apart, made sure they were clean and the screws were tight.

I also ordered new plastic trap caps and element end caps from Hygain.  I placed a wrap of Scotch 88 tape under each cap to help keep things tight and then wrapped both sides of the capes with more tape.  This will insure that the caps stay in place.  I also did the same thing with the element end caps. 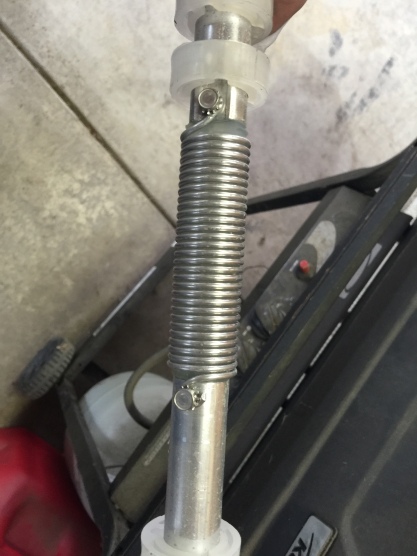 PUTTING IT ALL TOGETHER

I installed a 10 foot piece of mast to build the antenna on.

Finally it was time to reassemble the antenna and get it on the tower.  22 element halves took longer to install than I had imagined.  I spent an entire Saturday afternoon installing and leveling the elements.

Wanting to be sure that everything was working, I hooked a piece of coax to the antenna and checked the SWR (knowing that it would be off somewhat from what it would be on the tower). Everything checked out.  I even made a contact with a station in South America.

The TH-11 weighs in at 88 pounds with a boom length of 24 feet. The longest element is around 37 feet.  The only way to safely get the antenna to the top of the tower (without a crane) was to use a tram line.

I climbed the tower and tied a rope as high on the mast as I could reach.  From there I tied the other end to the kids swing set.  We used a sling to hold the antenna on to a heavy duty pully.  Then we tied a second rope from the gin pole on to the pully.  After a test lift, we were ready to go. 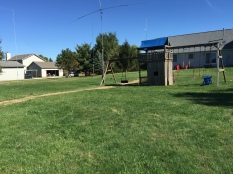 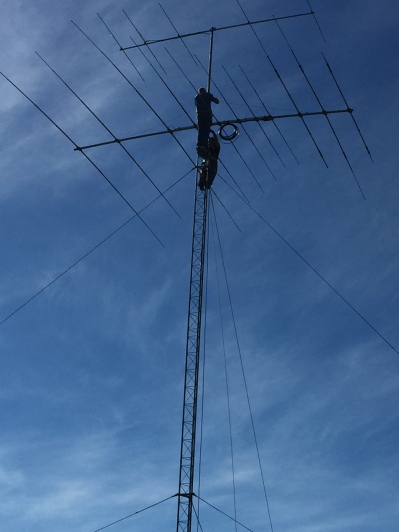 After dressing out the cables on the tower, we turned our sites on getting the cable into the shack.

On the house side of the conduit, I stuck the hose from my shop vac down the hole and sucked a string with a small bit of insulation tied to it through the pipe.  From there I pulled a rope through the conduit and proceeded to pull the rotor cable, antenna switch cable and one piece of LMR600.  It’s amazing how heavy all of that cable gets, especially after about 100 feet.

After getting the cable into the house and sealing everything up, I hooked up the rotor, antenna switch and coax to make sure everything worked.  By this time it was about 8:00pm.  To say the least, I was getting tired.  I made a few contacts and headed up stairs for the evening satisfied that everything was working as I had hoped.

The following weekend I built dipoles for 40 and 80 meters and an inverted L for 160.

I used a 3 inch piece of PVC pipe as a coil form and wrapped 8 or so turns of RG8 around it to act as a coaxial choke.  I added 14 radials approximately 100 feet long (I ran out of wire our I would have installed more) and hooked everything up to the coax switch.

The inverted L is 50 feet vertical. The remaining 70 plus feet runs over to a large tree.  So far, it seems to perform well, but I know that I need to build a receive antenna for 160.

My first tower was 50 feet with a TH6 on top.  This was installed when I was 18 years old still living with my parents.  I had that tower for about 3 1/2 years.  Since that time I have only had verticals and wires.  29 years later, I finally have a tower again.

It is amazing how much better I can hear (and be heard) with the beam.  There is an honest 4 to 5 “S” unit difference, plus the beam is usually quieter.

What would I do different? It’s hard to say. I was on a budget and had to stick to it. Even though I had the tower, antenna and rotor, I still spent about $4000.  If more $$$ had been available, I would have installed 45 or 55G and gone at least 100 feet. Perhaps that will come later with a second tower.  I still have 300ish feet behind this tower to work with.